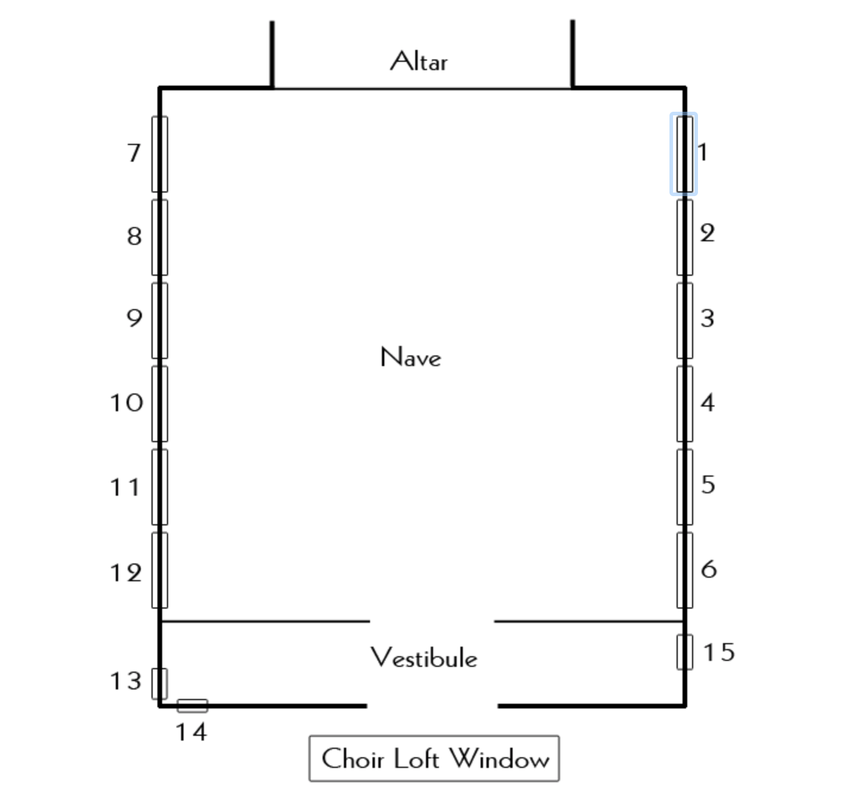 (Some images are missing and are going to be added shortly) 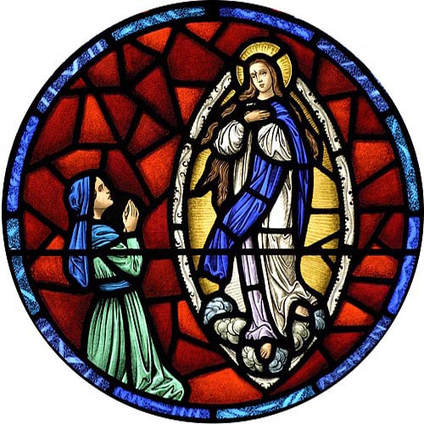 ​Top: The Gold Crown is a mark of victory or distinction. From this, it came to be accepted as'the mark of royalty.

Center : Our Lady of Lourdes with Bernadette.

​Bottom: The serpent coiled around the earth indicates the sinful nature of humankind as a result of Adam's fall.
Window 6
​
Top: The Monogram of the Blessed Virgin Mary. The letters of the name Maria are evident in this ancient symbol.

Center: Our Lady of Fatima with the three children, Lucia, Maria and Francesco. Also seen are three sheep. The children were shepherds.
​
Bottom: The Triangle with Descending Dove represents the Holy Spirit coming upon humanity as a part of the trinity.
Window 7

Top: A stylized representation of Bethlehem showing the star shining on the stable.

Center: The Nativity showing the Holy Family and shepherds.

​Bottom: Lilies coming forth from a manger. Represents a foreshadowing of the lily as a sign of Resurrection.
Window 8

Top: The cross and crown symbolize the reward of the faithful in the life after death to those who believe in the crucified Savior.
​
Center: Jesus and the children. Matthew's gospel tells of Jesus inviting the children to come to him.

Bottom: The Chi Rho. A monogram of the first two letters, Chi (X) and Rho (P), of the Greek word for Christ.
Window 9

Top: The Pomegranate is a symbol for the Resurrection and the power of the Lord, who was able to burst forth from the tomb. Because of the unity of many seeds in one fruit, it is also said to represent the Church.

Center: Jesus curing the blind man. The blind man has closed eyes and in his arms can be seen his staff. 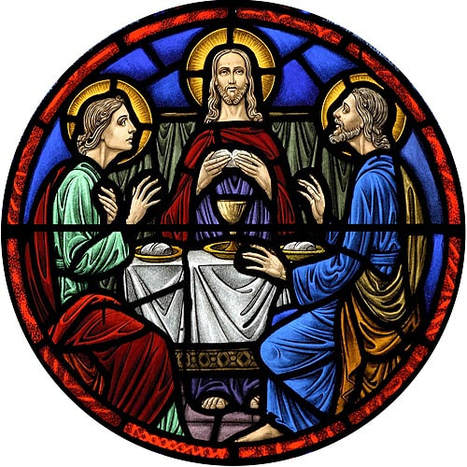 ​Top: IHS Monogram is a stylized form of the first three letters of the name of Jesus in Greek.

Center: The Last Supper showing Jesus, John the Beloved (no beard) and Peter.

Bottom - The Chalice and Host are a symbol of the eucharistic species of bread and wine.
Window 11

Top: The Flaming Heart with IHS in center represents the fervor of the Sacred Heart of Jesus.
Center: St. Mary Margaret Alacoque who in the seventeenth century received visions of the Lord exposing his heart. Her apparitions gave impetus to the devotion and shape to its purpose: to offer reparation for human ingratitude, especially indifference to the Blessed Sacrament.

Bottom: The heart surrounded by thorns represents the suffering heart of Jesus. 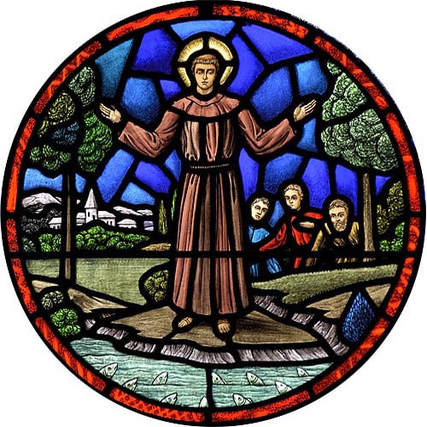 ​Window 12 (back of church on rectory side)

Top: The Back of a Hand with Rays is a symbol for all the saints. It is God's hand signifying divine care over the souls of the righteous.
Center:  St. Francis talking to the fish. There are several followers in the background. Notice that Francis does not yet have the stigmata.

Bottom: The Eye in a Triangle with Rays represents the all-seeing eye of God the Father looking out from the triangle of the Trinity. 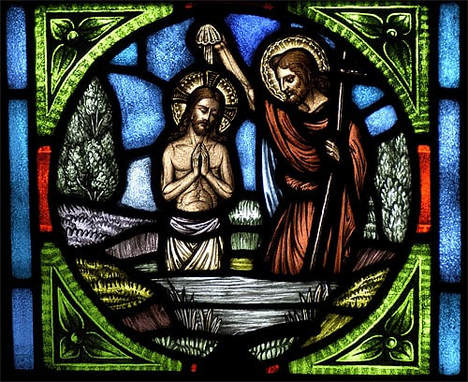 Jesus in the Jordan River being baptized by John the Baptist. The Baptismal Font used to be in this space and this window, as well as Window 14, represent baptism. 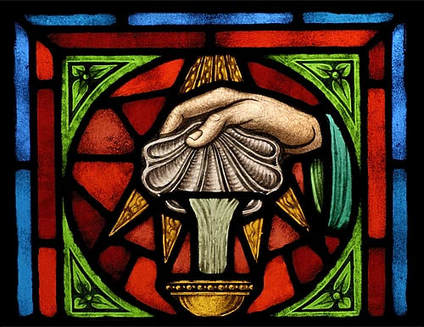 ​Window 14 (vestibule, rectory side, facing Harford Road)
A hand with a shell dripping water - a symbol of baptism. The Baptismal Font used to be in this space and this window, as well as Window 13, represent baptism. 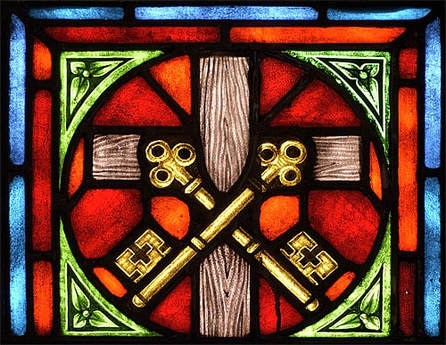 ​Window 15 (vestibule, facing Putty Hill Road)
A cross and crossed keys is shown. It was Peter who was given the keys of the kingdom. The cross represents the type of death Peter would undergo.
Choir Loft
Shown in this magnificent window is Christ as King of Kings along with the four Evangelists, Matthew, Mark, Luke and John. Under each is a symbol, shown and described below. 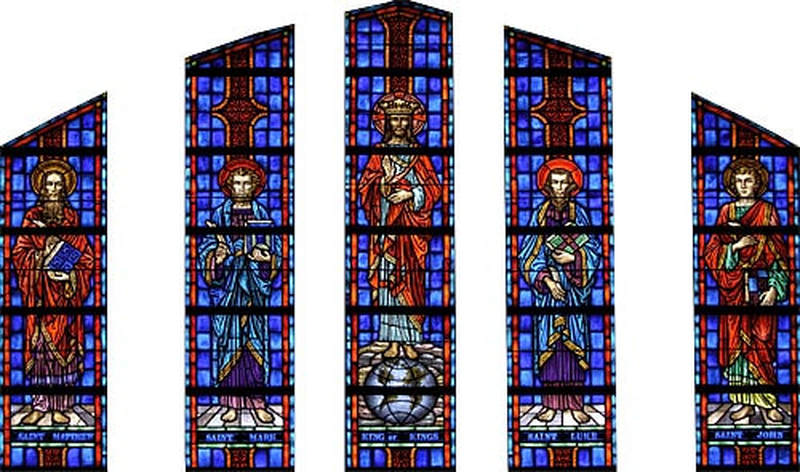 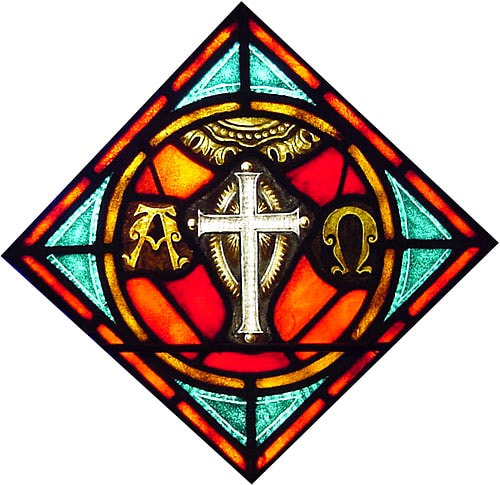 Under Christ the King is a cross and Alpha and Omega which shows the instrument of Christ's death. The Alpha and Omega are the first and last letters of the Greek alphabet and this represents Christ as the beginning and the end.